Here's where you'll find links to places where I have been interviewed or been a guest blogger about me and/or writing in general.

​Also, you can find me interviewing up-and-coming children's authors and blogging about writing every month over at the Just Write For Kids Website here, which you can also find collected here.

I talk with Brydie Wright's By the Book radio programme for her Halloween special in 2019. You can listen in here.

How to Develop a Writing Community: A Tale for Two Launches - on the Word Mothers Blog - October 2018

Go Behind the Scenes of The Children's Bookshop - March 2018

​Come with me on A walk through Walker Books - December 2017

Discover Three books that helped shape my own - August 2017 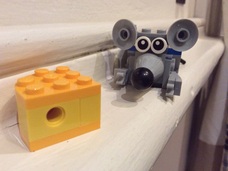 This was posted on my Blog on the 13th April 2014 and I thought it would be good to have it recorded here - it was part of a blog tour about how my writing process works: (or go to the page here)

What am I working on?

This blog post – it’s the most creative I’ve been since my first picture book, When I See Grandma  was recently released -  I’m in overdrive promoting it and trying to work out the vagaries of social media and how to harness it for good (my book’s good, that is), and trying not to pull my hair out in the process.

Having said that, there are always formless ideas whizzing around my head and jotted on scraps of paper – some of them make it to the safety of my writing box, and some even manage to be written neatly into my notebook, if they are really, really lucky. One idea has taken the form of a dragon named Lucinda-Daisy with unusual traits. What she does with these traits is yet to be discovered!

How does my work differ from others of its genre?

It doesn't, it’s just as gorgeous as all the other picture books! But it’s not weird, way out, wacky and laugh -out -loud funny though (yet!). My current picture book reflects a stage of life that is rarely covered in picture books – when someone you love is unresponsive due to illness - and it speaks to both children and adults on different levels.  My other writing projects are just as heartfelt (I think it’s the Social Worker in me) but lighter in subject matter.

Why do I write what I do?

I write because a snippet of something touches me on an emotional and/or imaginative level in some way and I want to explore it, stretch it, and see where it goes.

I write because I love the feeling of bringing form from the formless fragments in my head - it is a hard slog sometimes, but it is the next best thing to giving birth!

I write picture books because I simply love picture books – they are visually, linguistically and narratively appealing, and as I learned in Psych 1 – “The whole is greater than the sum of its parts.”(I don’t think my psychology lecturer came up with this idea himself!). As a mother I've seen the power these beautiful books have to speak into children’s lives, grab them emotionally and offer a shared framework for families to view and discus their world. Plus... they are delivered with a cosy snuggle in bed and kiss goodnight – and what could be better than that??

How does my writing process work?

It starts with being ‘grabbed’ by an idea to be tossed around in my head. It's usually something I've seen or a turn of phrase that inspires me. The idea for When I See Grandma came from taking my daughters to visit my mother as she was declining with dementia. The current idea for Lucinda-Daisy came when I was playing with lego, and the name came from a friend's daughter - (not that I'm saying my friend's daughter is a dragon!!). When I know I’ll have a good slab of time to be uninterrupted, I sit down on a comfy lounge with paper and pencil, scribbling and sketching ideas. Sitting up straight and typing on a computer comes later – that’s the hard work (as is resisting procrastination), it's slow and laborious, looking for just the right word or combination of words – I can get lost for hours pursuing a word trail on Thesaurus.com, or drive my family crazy when I’m on a word hunt!

I get my best breakthroughs driving in the car. It’s just as well my car is a mess of scrap papers, torn open envelopes and the like, in fact, my car could double for rubbish truck.

Once I’m happy-ish with the first draft, I go in search of honest feedback – the family is no good for this, I have to look further afield to a writing buddy and/or submit to a competition that gives feedback. Then, when I find out that the end of my story is really the beginning - it’s back to rewriting! When I feel like I'm close to getting it, I send the next draft for more feedback - perhaps a manuscript assessment agency as I did for When I See Grandma.Then its back to rewriting until it's ready to be sent off to the publisher..