Where you can find me - Speaking and Events.

Lunch With the Stars, Many September 4th

Authors in the Hills - September 21st

Lunch with the stars Manly - 30 August

KidLitVic Meet the Publishers - Melbourne 7 May 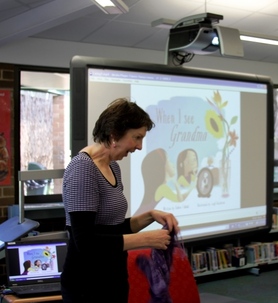 Speaking Testimonials:
"Debra Tidball was our visiting author for our recent Book Week celebrations. She spoke with children in Years 3-6 about her book "When I see Grandma". This book is her first published work and is based on her experiences taking her daughters to visit their grandmother when she was in a nursing home with dementia. A poignant book, it is sensitively written and beautifully illustrated by Leigh Hedstrom. The book is a celebration of a life lovingly remembered and the time Debra spent with the different classes reflected this. Debra engaged the children so well, involving them meaningfully as she spoke about why she wrote the book and how it was impacted by her Christian faith. The session was very well received by children and teachers alike with one Year 5 teacher beside me commenting, "She is very good ..." and Debra is! I would recommend her to any school, confident that her gentle, careful and responsive approach would be well received and appreciated. "
Stephen Brinton, Teacher-Librarian, Toongabbie Christian School.